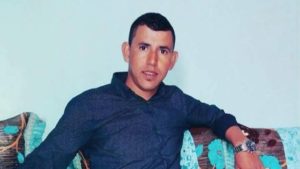 Algerian soldiers recently committed another blunder when they fired at a Sahrawi who had lost his way near the Tindouf camps, in southwestern Algeria.

On March 18, Kari Mohamed Ali El Ouali left one of the Tindouf camps, known as “Laayoune camp”, for a car ride with his friend Ahmed Lebouiya. They drove for just few minutes before they were targeted by the Algerian soldiers and shot at.

The Tindouf camps have been subject to a military blockade since their establishment in southwestern Algeria in the mid-1970s. No inhabitant can leave the camps without the prior authorization of the armed militia of the Polisario or the Algerian military authorities.

The Algerian soldiers shot at Ali El Ouali and his friend without firing a warning shot in the air. The driver and the passenger were seriously injured.

They were admitted in the Tindouf military hospital where Ali El Ouali died of his wounds on March 24. His friend is still hospitalized and his condition is deemed serious.

This is not an isolated case. In January 2014, two other young Sahrawis, Mohamed Alyine Bih and Khadri Hamadha Khandoud were coldly shot dead by the Algerian army near the border with Mauritania.

“This is a crime and we are going to do everything so that Algeria is held accountable of this despicable act,” President of the Sahrawi Association for the Defense of Human Rights (ASAVEDH), Ramdane Messaoud, told the Moroccan portal le360.ma. Ramdane Messaoud insisted that this is not an isolated case.

This NGO has already filed complaints in Spanish courts against the Polisario leader Brahim Ghali for crimes against humanity and other serious crimes he committed against the inhabitants of the Tindouf camps.

If this NGO and other human rights advocates condemned the killing of Kari Mohamed Ali El Ouali, the Polisario leaders, as usual, will not say a word as they do not want to irritate their Algerian mentors.