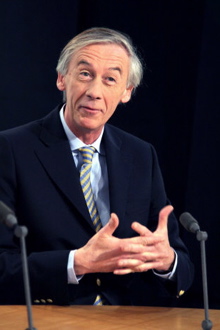 Since the arrest, on last September 21st, of Mustapha Salma Ould Sidi Mouloud, Inspector General of the Polisario police, voices continue rising from everywhere to denounce this piracy act violating all human rights international conventions. Currently, nobody can tell where Mustapha Salma is held, but what is certain is that he is detained by the Polisario torturers and their protectors from the Algerian military intelligence services. He undergoes a despicable interrogation in a vain attempt by his tormentors to extort from him a small confession that would legitimize their abuse of authority. It is in this context that the President of the Foreign Affairs Committee, at the French National Assembly, Axel Poniatowski, called on Tuesday for the immediate release of Mustapha Salma Ould Sidi Mouloud. In his appeal, Poniatowski, Val d’Oise deputy, wishes from the bottom of his heart that Mustapha Salma be quickly released as well as “all the hostages caught in a perfectly scandalous way, as was the case for him”. He, moreover, denounced the arbitrary nature of this arrest, which he said, indicates the methods used by the Polisario in the very narrow sense of democracy. This will push to think all those, who did not have a final opinion on the methods used by the Polisario in dealing with those opposing it, as warned by the Foreign Affairs Committee President.

Poniatowski said it was not in the interest of the Algerian friends that the situation be unstable (in the region), hoping that the text (autonomy plan) submitted by Morocco to the UN, would receive their approval. The Moroccan proposal, he said, is supported by France in the United Nations and we hope on this basis that the interested parties sit around a table and talk.