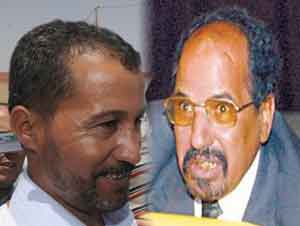 The Polisario is strongly afraid of one of its men’s return to the camps, for fear that he contaminates, by his ideas and the way he sees things, all the Sahrawi population in Tindouf camps. So as not to take such a risk, and certainly in conformity with instructions from the Algerian Intelligence and Security Department (DRS-military intelligence), the Polisario leadership has anticipated the events, announcing to the Inspector General of the Polisario Police that he is persona non grata in the camps.
To protect himself and his family against Polisario reprisals, Mostafa Salma Ould Sidi Mouloud, currently staying in Zoueirat, in Mauritania, has relaunched a distress call to international Organizations, defenders of human rights and to freedom-eager forces worldwide.

Salma Ould Sidi Mouloud, who also risks imprisonment if he returns home in the camps, is trapped halfway between his family and his homeland, Morocco. The head of the Polisario Police is wondering about the nature of the crime he had committed to be accused of being a traitor. Can we qualify of a treason the simple act of having freely expressed one’s opinions? Having lost all confidence in his seniors in the Polisario, Ould Sidi Mouloud, who is more concerned for his wife and children, has called all the Sahrawis in Tindouf, asking them to take care of his family.
The problems of Ould Sidi Mouloud started following the press conference he had recently held in Smara, Southern of Morocco, during which he announced his full support to the Moroccan autonomy project. But what has made his case worse, was his promise to defend the project in Tindouf camps.
Such words and position had the effect of a bomb among the Polisario leaders who, driven by the leaders of the DRS, have been forced to impose retaliatory measures against Sidi Mouloud. The latter is now entirely relying on NGOs and other human rights defenders so that they let him re-enter Tindouf camps.