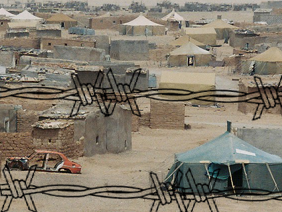 It is obvious that Polisario’s leaders can not manage the growing discontent of the Sahrawi people held against their will in Tindouf camps, and especially the anger which is spreading day by day among young native people in Lahmada. The cases of Sahrawis escaping from Tindouf camps to join the motherland, Morocco, continue despite the measures taken to restrict their mobility outside the camps. Indeed, this was the main point of discussion included in the agenda of a recent meeting that brought together Polisario senior leaders and the strong man of Algerian military intelligence, General Mohammed Medine, called “Taoufik” and his close associates.

They unsuccessfully tried to find a way to tighten their control on the populations of Tindouf to curb the collective escaping of Sahrawis towards Morocco. But despite the measures taken, the bleeding continues, since in only one month, two groups of 83 and 57 people have managed to deceive the vigilance of both air and ground patrols of the Polisario and the Algerian National Army, during their crossing through the desert. The last group to set foot in Morocco is composed of 57 Sahrawis, including 32 women and five children (aged between 1 and 14 years). They managed to reach Morocco, via the border post of Guergarat, in the South of Dakhla. One of the chioukhs of the identification process was also among the group. He was accompanied by his wife, his son and his mother. Since the beginning of this year, some 1.312 Sahrawis have escaped the Tindouf camps to return to Morocco. Being victims of false ideologies orchestrated by elements of the Polisario against Morocco, thousands of Sahrawis sequestered in camps in the middle of the desert, have only one dream: to find the opportunity to leave permanently the cursed places of Lahmada. An increasing rage is spreading in the camps and especially encourages young native people of the camps, to escape, at any cost, this chaotic desert where their future is nothing but a mirage, and their only hope is to escape from there and rejoin the homeland, Morocco.