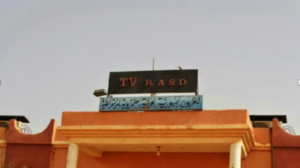 Disenfranchised young Sahrawis in the Tindouf camps took to the Polisario’s TV headquarters last Thursday (April 20) and totally ransacked the premises, according to testimonies from the Rabouni camp, which houses the separatist front’s headquarters.

The Front’s propaganda tool has been heavily damaged and it will take several weeks before it resumes its broadcasts, the same sources said, adding that the Polisario picked an Algerian company to repair the damage and that, as usual, the bill will be paid by the Algerian taxpayer’s money.

Once informed of the incident, the Polisario leadership ordered its armed militiamen to hunt the perpetrators of the sacking, which looks like a revengeful act.

In recent times, Sahrawi youth seem resolved to express their exasperation and despair by attacking the Polisario Front symbols, after they have been deceived for over forty years by empty promises of a better tomorrow.

Normally, news about such incidents are rarely revealed because of the manu militari blockade imposed on the Tindouf camps by the Polisario, with the logistical support of the Algerian army.

At present, in view of the stalemate of the Sahara issue and the many setbacks suffered by the Polisario at the diplomatic level, the dissenters seem determined to step up their protest and to make their voices heard.