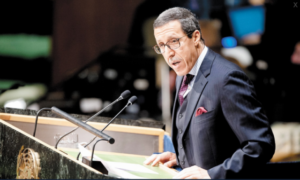 Morocco’s Permanent Representative to the United Nations, Omar Hilale, did not spare his Venezuelan counterpart, who had, in his address during a UN debate on the financing of the Objectives of Sustainable Development on Tuesday (April 18)), called for taking into consideration the occupied territories such as Palestine and the Moroccan Sahara.

The Moroccan diplomat, exercising the right of reply, called to order the representative of Venezuela, a country well-known for its hostility to Morocco and its support for the independence claims of the Polisario and the hegemonic ambitions of Algeria.

Omar Hilale ironically wondered whether the Venezuelan diplomat, Rafael Darío Ramírez Carreño, had not made a mistake about a meeting or an agenda when he referred to the Moroccan Sahara. He recalled that Morocco, long before the UN adopted the Objectives of Sustainable Development, launched a sustainable development model in the Sahara and earmarked $7 billion to its implementation. The project involves local authorities, elected representatives and all the components of the civil society of the region, the ambassador added.

In the Moroccan Sahara, men, women and children are not starving and do not cross borders to get food, as is the case in Venezuela, where the oligarchs of the Chavist dictatorship lead a luxurious life, exploiting the country’s oil and gas resources, Omar Hilale said.

He went on to say that he has been deeply surprised by the call for humanitarian assistance launched by Venezuelan President Nicolás Maduro, despite the fact that the country has plenty of oil and gas. This is a tangible evidence, he said, of the failure of the Caracas regime and its diplomacy.

The Moroccan diplomat noted that at a time when the people of Venezuela lack medicines, food, formula and other basic goods and when the government closes schools to spare electricity consumption, the Venezuelan ambassador in New York shamelessly uses his two private jets to travel in the United States and in Caribbean countries.

Omar Hilale stressed further that there can be no sustainable development without democracy, without respect for human rights, and without the rule of law, and deplored the fact that the ruling dictators dishonor this great Latin American country.

The Moroccan ambassador said that the Venezuelan diplomat cannot give lessons to Morocco, at a time Maduro’s regime is starving the Venezuelan people and the army is firing daily on peaceful demonstrators who aspire to democracy and dignity.