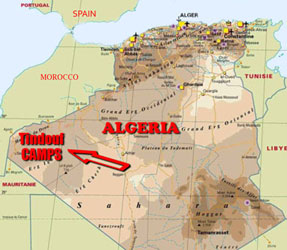 Ahmed Belouha Hamoua is a civil Sahrawi opposing the Polisario. With two of his companions, he is stagnating in Tindouf prison since five months. The continuing calls from NGO defending human rights , to at least authorize them to be visited, received no answer. The only crime of these people is that they expressed their opposition to the Polisario separatists who are detaining as hostages all the population in these desolate camps in the Algerian desert.
The OMDH, one of the main organizations defending human rights in Morocco, has in vain asked the Algerian authorities to allow access to these prisoners kept in total isolation, and whose families are determined not to give in and struggle for their liberation. The two other prisoners are Ahmed Salem Chibani Hamoua and Mohamed Salek Oueld Keya, hold prisoners for the same reasons and in the same prison. The latter is located next to the school called “9 juin” in the Tindouf Camps.

The OMDH initiative happens following a claim from the family of Ahmed Belouh Hamoua. The latter is going on hunger strike and is undergoing inhuman and humiliating treatment. The family relies on information transmitted to it from the sequestration camps of Tindouf, by a cousin called Ahmed Belouh Hamoua.
Outraged, the OMDH has expressed, in a release, its astonishment about these prisoners being court-martialled. It has also called the Red Cross international committee to intervene for the protection of these civils who have been arrested for having expressed peacefully their opposition to the Polisario and to the misappropriation of humanitarian aid addressed to the populations in Tindouf Camps.