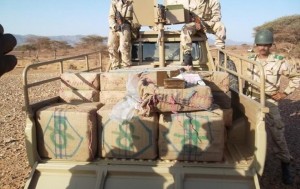 Individuals from the Polisario were arrested earlier this month in Mauritania for involvement in a large-scale hard drug trafficking, a Mauritanian official said.

A dozen other drug traffickers of various nationalities were part of the network.

This time, it’s a Mauritanian official who confirmed the involvement of the Polisario in the drug trafficking networks operating in Mauritania.

According to US intelligence agencies, drug dealers receive the drugs shipped from Latin America in the Gulf of Guinea or in Mauritania and Mali when the banned substance is conveyed by plane. The dealers then redirect the substance to Europe and sub-Saharan countries through the Sahel.

At the end of January, Mauritanian security services had announced the seizure of a large quantity of drugs, namely 2 tons of cocaine. The small bags of cocaine were carefully hidden in a camping ground on the Atlantic coast, 200km northwest of Nouakchott.

In a statement to France 24 TV in Arabic, Ahmadou Abdel Malek, official spokesman in France of the Mauritanian ruling party the Union for the Republic (UPR) who was commenting on this dragnet in Mauritania, said the operation enabled to seize the large quantities of drug and to arrest dozens of traffickers from Mauritania, Algeria, Mali and Senegal in addition to Polisario Sahrawis.

“Mauritanian security and anti-drug forces arrested several gangs and this is not the first time they manage to get hold of a band mostly made up of members of the Polisario and members from the great Sahara, who know perfectly well the area…” said Ahmadou Abdel Malek, confirming thus the rumors on the involvement in drug trafficking of individuals from the Tindouf camps, acting under the orders of some Polisario executives.

According to US intelligence agencies, this drug trafficking network was also used to supply arms and ammunition to the jihadists of AQIM and other armed groups in Mali and the Sahara and Sahel region.

And this is not the first time that official sources speak of the involvement of the Polisario in drug and arms trafficking, an activity that is on the rise in the region.