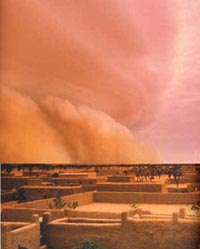 Celebrating the anniversary of the illusionary “SARD” creation, in Tindouf camps, in the Algerian South, hundreds of seditious propaganda brochures and leaflets have been distributed, for many days, denouncing the disastrous humanitarian situation of the Sahrawi people in Tindouf camps, hostages of the hazardous policy of the Polisario leadership and of the regional godfather’s nuisance willingness, the unbearable life conditions of the people, held by force in shame camps,  the raging repression and the corruption prevailing within the separatist movement machinery.
Propaganda brochures and leaflets have been distributed, in great numbers and at a large scale, within the administrative premises, police offices, guests and foreigners reception sites, ‘Presidency’ headquarters and military camps. A dispatching which reflects the rebellious movement’s strength and scope.

Writers of propaganda brochures and leaflets, a reflection of a totally new  current opposing the Polisario, added to the other existing currents, like Khatt Ach-Chahid, yearn for restoring justice, equality and freedom within camps, initiating the organization of free and transparent elections of the movement institutions and setting up a democratic and responsible leadership, ready to listen to the people’s deep aspirations, beyond any kind of intolerance or discrimination, and able to bring well-being to the populations and peace in the region. The opposition movement also calls for a reconsideration of the Polisario’s strategy within the negotiation process with Morocco.
Within the same context, should also be noticed the heavy climate of suspicion and doubt prevailing even within the Polisario negotiation delegation characterized by ‘reaction’, ‘double game’, ‘double dealing’ and even ’betrayal’. Some members of the delegation are suspected of intending to get along with Americans for personal profit, others of trying to return to Morocco, with advantageous conditions once back home.
This symptomatic state of things shows, if need be, the deep unrest shaking the Polisario, caught in its internal divisions, structural contradictions and deadlocks, spread out over three decades that have devastated whole generations and created disagreements, and even splits, hard to be reconciled, among tribes and sometimes within the same tribe or clan, or even the same family!