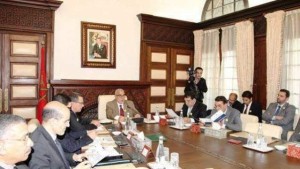 The head of the Moroccan government, Abdelilah Benkirane, held, Monday in Rabat, an emergency meeting with the leaders of the main political parties represented in the Parliament, to discuss the latest developments of the Sahara issue.

Debates reportedly focused on the response to make to the Swedish government’s initiative to recognize the Polisario and its so-called Sahrawi Republic (SADR) as suggested by the Swedish ruling Social Democrat party in a bill tabled before the Parliament.

Given the importance of the topic discussed, the four parties of the majority and the four parties of the opposition attending the meeting at the Prime Minister’s office on Monday put aside their rivalries and political differences to ponder together on means to derail the Swedish project, deemed by all very hostile to Morocco’s supreme interests and territorial integrity.

The Swedish Social Democratic government’s project to recognize the self-proclaimed Sahrawi Republic, which is not recognized by the United Nations, and plans to open a SADR’s diplomatic representation in Stockholm, sparked heated debates and a broad mobilization of civil society and the political class in Morocco.

As agreed upon at Monday’s meeting, the leaders of the eight major political parties in addition to the SG of the Unified Socialist Party (PSU) would shortly fly to Stockholm for talks with Swedish politicians and the authors of the bill, particularly the leaders of the ruling social democrat left and the greens, on the mistake they are about to commit.

On the diplomatic front, Moroccan Foreign Minister, Salaheddine Mezouar, who is taking part in the UN General Assembly, discussed the issue with his Swedish counterpart, Margot Wallström, in New York on Tuesday.

This first direct and official contact between Rabat and Stockholm was an attempt to avoid a political and diplomatic crisis between the two countries, as the issue concerns Morocco’s sovereignty.

An American expert in international relations commented that the Swedish government’s approach is going against the tide of the UN resolutions and of the UN-sponsored ongoing process for a political settlement of the territorial dispute between Morocco and the Algeria-backed Polisario Front.