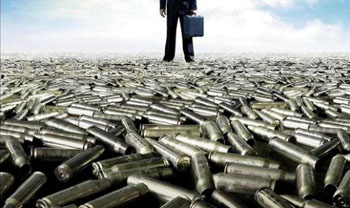 What is left from the Polisario Front ? Few things are left to say if we examine closely the declining status of the independantist-armed group, the armed wing of the Algerian generals! The founders of the North African revolutionary movement are dead or have returned to Morocco or Mauritania, the others fighting with the pro-Algerian clan of Mohammed Abdelaziz have been imprisoned, are exiled or have escaped. Fighters, who were thousands during the 70s and 80s in an open war against Morocco and Mauritania, with the direct military support of Algeria, have left for their respective countries or to Spain. There remains, in arms, only some hundreds of indoctrinated men, most of them born in Tindouf camps, Algeria, and who hardly share with their eldest, the independence dream.
The melancholic Polisario fighters, being in forced rest, remain tempted by the Islamist fundamentalism, enduring and prolific in the region, mainly in Algeria with the dissolved Islamist Salvation Front (ISF), the rival factions of the ISF split and the Salafi Jihadi movement with the Salafist Group for Preaching and Combat (GSPC), active in many regions of Algeria and in the Sahara. Thus, its obedience to Al-Qaeda makes it a fearsome opponent. Contacts and common war, in the African Sahel, between the Polisario and the GSPC are frequent. The collision of the two warrior groups is evident and the risk to see the Polisario changing radically or one of its parties, within the Islamist radical influence, is a major datum, seriously taken by the political and military experts and strategists.

The Polisario, adopting the Algerian thesis, is in a real deadlock, dramatic as well as surrealist. Senior executives of the movement are so older, fighters also are demobilized and demoralized, camps are in destitution and extreme precariousness, despite the international aid, oppression practiced there is terrible and unbearable, the young people’s wish to escape is real and evident or, failing, they go to the organized crime, with smuggling, illegal migration, drugs and racketeering.
Moreover, contest in camps is a reality rather bitter for the Polisario leadership. Khatt Achahid has severely criticized, once more, the hard line followed by the Polisario in negotiations, under the UNO auspices, with Morocco and proposed to negotiate in its place, considering that the Moroccan project of internal autonomy of the Sahara is worthy of interest and deserves a serious negotiation.
Finally, what can the Polisario hope? Independence being only a dream, born in the head of young idealist and utopist rebels, incompatible with the data relating to the region geopolitics and with the ongoing globalization suggesting to countries to group together in supranational or federal entities, even confederal to be able to resist and survive to the globalization shockwave. Soul retrieval is a no way out, against the UNO recommendations and the Security Council decisions as well as the wish of the international community to see the region stabilized and participate in the common effort of fight against terrorism and the Islamist armed fundamentalism and against other kinds of trafficking that infest the Big Maghreb region and the African Sahel.