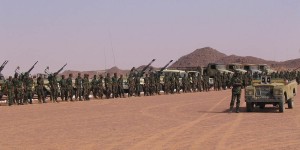 The Polisario has recently multiplied provocative acts against Morocco, at a time when the UN and Washington are trying to convince the parties to the conflict to return to the negotiating table to settle the Western Sahara conflict.

The Polisario is seemingly opting, at the instigation of Algerian Generals, for escalation and threatens to resort to arms again at a time the UN Security Council is scheduled to convene a meeting on the Western Sahara issue by the end of April.

The White House is worried over the growing terrorist threats endangering the Maghreb and the whole Sahel-Sahara region especially that weapons have been freely circulating in the region since the fall of the Gaddafi regime.

For the Pentagon, the destabilization risks are increased by the presence on Libyan soil of several armed terrorist groups close to the Islamic State which might be tempted to extend their activities to the other North African countries.

It is in this context that American diplomacy is trying to reactivate the peace negotiations between Morocco and the Polisario, neglecting however to involve in its move Algeria which is party to the Western Sahara conflict.

To put pressure on the UN Security Council, the Polisario has opted over the past weeks for provocation and escalation.

According to reliable sources, the long-time Polisario chief, Mohamed Abdelaziz, has reportedly gathered his armed militia near the buffer zone close to the security wall separating the southern areas of the Moroccan and Algerian territories.

Moroccan soldiers posted along the security wall have reported that the Polisario troops, placed on high alert, perform military drills every day.

The Polisario leaders, having lost all hope to win any battle on the diplomatic ground, have no other choice than resort to provocation at least to calm down the Tindouf camps refugees who are getting more and more frustrated by their unbearable living conditions, a Sahrawi dissident from Rabouni camp said over the phone.