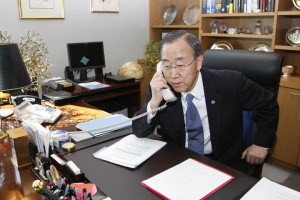 Morocco has received formal assurances from The UN Secretary-General Ban Ki-Moon with respect to the neutrality of the United Nations, its agencies and its special envoys in dealing with the Western Sahara issue.

Rabat actually announced that it had received “formal guarantees” from the UN Secretary-General with respect to a neutral and objective handling of the Sahara conflict opposing Morocco to Algeria through the Polisario.

In a statement released Thursday, the Royal Cabinet said that Ban Ki-Moon had told King Mohammed VI, over the phone, that he had “taken into account, as appropriate, Morocco’s comments and observations.”

He also gave the Moroccan king “formal guarantees regarding the neutrality, objectivity and transparency of the UN officials in charge of leading the UN mission on the conflict.”

The UN Secretary General seized the opportunity to express gratefulness to the Moroccan sovereign for his active role and for Morocco’s constructive support to the United Nations agenda, in particular in matters of peace keeping, human development and fight against extremism and fanaticism.

Algeria and its protégé the Polisario have, after they exhausted all their tricks and maneuvers, turned around and tried to attack Morocco on human rights matters. In this regard, they repeatedly demanded the expansion of the MINURSO mandate to human rights monitoring in Western Sahara.

But according to analysts, this new strategy seems to have failed since neither the United Nations nor its Security Council have adhered to this maneuver. The European Union has also shunned the claim made by the Polisario and its Algerian mentors, when it extended the latest fisheries agreement with Morocco to the maritime zone off the Moroccan southern provinces.