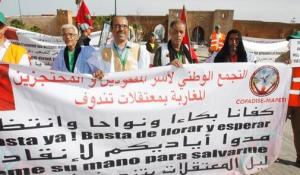 The Collective of families of Moroccan missing and jailed persons in Tindouf organized a sit-in in Rabat last Thursday to denounce the violations of human rights perpetrated by Algerian authorities and the Polisario against the Moroccan Sahrawis sequestered in the Tindouf camps.

The sit-in was staged outside the headquarters of the National Council for Human Rights (CNDH) with the participation of civil society activists and former prisoners of the Polisario.

The event is part of a national and international campaign meant to expose the violations of human rights committed by the Polisario torturers, against Moroccan civilians and military on Algerian soil.

For the president of the Collective of families of Moroccan missing and jailed persons in Tindouf, Miloud Khalil, the campaign is also destined to inform the international public opinion about the violations and abuses of the Polisario and its militia with the complicity of the authorities of the host country, Algeria.

For his part, Mohamed Ouadahi Ben Mohammed Salem, a former prisoner of the Polisario, said it is high time the United Nations and human rights advocates get alarmed about the dire situation prevailing in the Tindouf camps.

Ouadahi, who is member of the Oulad Bousbaa Sahrawi tribe, described how he had been tortured when he was jailed by the Polisario and how all the prisoners were subjected to the same merciless treatment. He said many detainees died and their families could not even recover their remains and bury them decently.

Another Sahrawi activist, whose husband had been reported missing during the Sahara war, spoke bitterly of the sufferings endured by the families of missing people. All these families want is to know the fate of their loved ones, she said calling on the Algerian government to assume its responsibility in this regard.
The Collective militants seized the opportunity of the sit-in to urge international human rights NGOs to pressure Algeria and the Polisario to immediately stop the criminal acts and abuses perpetrated in the Tindouf camps. But will this umpteenth SOS for help be heard?