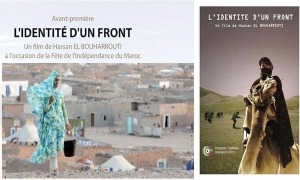 “Polisario, the identity of a front” is the title of a new documentary film that unveils the geneses and the hidden face of the Polisario as a separatist movement and as a violator of human rights in the Tindouf camps.
The new documentary by Moroccan director Hassan El Bouharrouti informs the viewers and the international public opinion about the reality of the artificial conflict over the Western Sahara and about the legitimacy of the Moroccan cause.
The documentary, whose première was screened in Dakar on Sunday, sheds more light on the geneses of the Sahara conflict and gives a proper picture, through testimonies, of the sufferings endured for forty years by Moroccan Sahrawis in the Tindouf camps, turned by the Polisario into an open sky jail in the Algerian desert.
The screening was followed by a debate on various aspects addressed by the film in the presence of its director who made a historical survey of this conflict fabricated by the former Algerian and Libyan regimes at the peak of the Cold War.
The documentary surveys the history of the Polisario since its inception as a separatist movement, analyzes its ideology and archaic structures, exposes its supporting sides and funding sources, and depicts its illegal practices and lack of legitimacy among the people it claims to represent.
The film, based on documented evidence and overwhelming testimonies, shows Sahrawis, who managed to flee the camps and return to Morocco, debunking the lies circulated by the separatists’ propaganda. The film also deals with the inhumane acts which are common practice in the camps such as the expatriation of children to Cuba and other places for ideological indoctrination purposes, arbitrary detention in secret places of any dissenting voice, not to mention the blackmail of families attempting to flee the Tindouf hell.
Through his film, El Bouharrouti seeks to attract the attention of the international public opinion to the atrocities and gross violations of human rights committed by the Polisario torturers, with the collusion of Algerian authorities, against defenseless civilians.