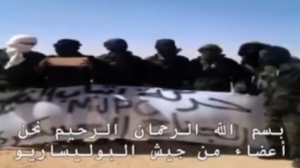 The growing rebellious movements in the Tindouf camps are tightening the noose around the Polisario leader, Mohamed Abdelaziz, and his cronies.
Just few days after dissident militiamen proclaimed the creation of the “katiba D’Cheira” battalion, another group of military dissidents announced they have set up a second battalion dubbed “Khatri Hmadha Khandoud.”
The military wing will undoubtedly strengthen the Youth Movement for Change (MJPC) which is opposed to the Polisario corrupt leadership and to its mismanagement of the Tindouf camps where all freedoms are choked.
The creation of the “Khatri Hmadha Khandoud” battalion was announced in a new video tape aired on Monday evening by the Moroccan regional TV channel “Laayoune TV.” The video announcement was made by nine masked militiamen, dressed in fatigues, who said they belong to the “4th military region” of the Polisario Front.
Unlike the previous video broadcast on Saudi TV channel “Al Arabiya”, the authors of the new 1:06 mn video used a firmer tone and a more structured speech clearly stating their goals.
According to these militiamen, their first purpose is to “defend the MJPC members against any attempt likely to harm their physical integrity.” Their second goal is to infiltrate the Polisario military apparatus to overthrow the so-called Defense Minister Mohamed Lamine Bouhali, who has accumulated massive wealth on the back of the armed militias. Their third objective is to target all the symbols of depravity within the Polisario leadership, in order to oust them from the power they have been clinging to for 40 years.
The battalion creators also call on all civil and military Sahrawis in the Tindouf camps to overcome fear and rise up to overthrow the unjust Polisario Front.
The creation of the MJPC military wing has alarmed Mohamed Abdelaziz and his lieutenants who started taking very seriously the young Sahrawi rebels’ threat.
The Polisario has lately multiplied meetings and investigations to unveil the rebels’ leaders in order to silence them once and for all. The Polisario wants to inflict the most severe punishment on the insurgents to set an example for all other youths who might be tempted to join the dissident movement.