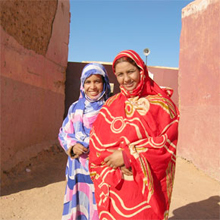 When arriving from the North,  as soon as we penetrate the Sahara, we are surprised by women’s liberty there, discretely veiled from the head to feet in a long and sheer veil, but their face is still uncovered, we see them circulating freely and conversing quite openly with foreign men. The nomad life, the life of the Saharan shepherds based on transhumance, often long and dangerous moving, have, during years, shaped the mentality of the Sahrawi woman and have made of her a strong woman. During Morocco’s Sahara recovery, the Sahrawi woman had been already predisposed to play her role by adapting herself to the transformation within the new society with definitely irrevocable changes, structural changes much more intense than those faced by men.
The Sahara region has benefited from the positive discrimination due to the Moroccan State’s will to positively compensate the situation of destitution in which the Sahrawi people had lived during the Spanish colonization. Men and women have not been able to benefit from the normal school age. A wide program of fight against illiteracy, of education and human development in the areas of economic and social life has been launched at all levels and throughout the territory. Sahara witnesses since then a silent revolution, and like her equal the man, the Sahrawi woman has been involved in a society changing rapidly, in a good way and within which she benefits from all the rights, crowned by a more liberal family code which drafting has mobilized all the society components. It is considered by the NGO Global Rights as one of the most progressive in the Muslim world, a sign of the progress achieved by the Moroccan woman’s rights.
On the political scale, the Sahrawi woman is present in all the institutions. She is an MP, a municipal counselor, a teacher, a doctor, a company and NGO manager. However, despite this progress, the Sahrawi woman is still suffering from rift and separation. In Tindouf camps in Algeria and in front of the international community’s silence, women are victims of the most serious and systematic violations of human rights, rapes, physical abuse, slavery and exploitation.
It is legally and politically absurd to consider the Sahrawis detained in Tindouf as refugees. The 1st article A2 of the Geneva Convention of July 28, 1951 gives a general and universal definition of the refugee as a person who “owing to well founded fear of being persecuted for reasons of race, religion, nationality, membership of a particular social group or political opinion, is outside the country of his nationality and is unable or, owing to such fear, is unwilling to avail himself of the protection of that country; or who, not having a nationality and being outside the country of his former habitual residence as a result of such events, is unable or, owing to such fear, is unwilling to return to it”.
The measures which guarantee the non-repression, the non expulsion and in the sequestered Saharwis’ case, the non-liberation concern “those whose life or liberty can be made at stake” which is exactly the contrary in the Sahrawi hostages’ case, as all those who have been able to escape from the camps, be it civilians or military persons, women or men, enjoy currently and fully their citizenship in the Sahara under the Moroccan sovereignty and benefit from all their civic, political, economic and social rights, assume large responsibilities within the machinery of the Moroccan administration and participate as Moroccan militants in the campaign against the Polisario.
It is really futile to foresee the Sahrawi woman’s future within the current situation of separation, as the Sahara, which will be autonomous under the Moroccan sovereignty will be in need for these women in order to participate in the development, democracy and prosperity action. It is painful today to notice that the Sahrawi family finds itself deprived, against its will, from some of its members and while these women in the decolonized Sahara live in liberty, the other sequestered ones are crying and, as victims, are waiting for their liberation: two destinies