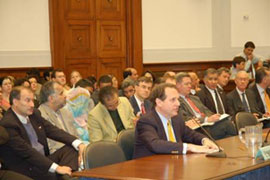 The Association for the Defense of the Sequestered in Tindouf (ADESETI) has drawn up a list of the  Polisario torturers. Its President Yahia Alamine has just informed the international organizations.
For that purpose, the ADESETI, a humanitarian association headquartered in Sweden, with a branch in Laâyun, has actually drawn up a new exhaustive list containing the names of the Polisario torturers and detailed information about their identity as well as the positions they hold within this organization and even the tribe names of their origin. In total, it is about forty persons most of them coming from R’guibat and Tekna tribes. The work has been also based on crosschecked data and information emanating from some members of the Polisario who do oppose its thesis and hope that an urgent solution would be found to this more than thirty years conflict. Another list of persons, victims of the torture inflicted by the separatists has been drawn. 71 Sahrawis died under torture in the Polisario jails. More than that, other torture victims still suffer from mental troubles among other effects they have kept from their stay in Tindouf, to which it must be added a new series containing almost forty victims, with strong evidences, narratives and descriptions

The purpose of this international public opinion awareness work is to draw the attention of the international community to the catastrophic situation that the sequestered witness in Tindouf camps and to the flagrant violations of human rights. It should be noted that the three abovementioned lists have been sent to many world organizations among which the International Federation for Human Rights and the United Nations High Commissioner for Refugees, asking them to use their influence in order to put an end to these violations and settle the issue of the separated families due to the conflict and, in general, urging them to find an urgent and definitive solution to these tragedies. These institutions have favorably replied to the letters sent by the Association asking for additional information before starting a whole procedure in favor of these categories of victims of the Polisario atrocities.
On the international scale, the ADESETI carries out awareness activities about the Sahara issue and what helps us precisely is the fact that our head office is located in Sweden and organizes meetings and conferences on the experience of Equity and Reconciliation Committee. It denounces during such conferences the inhuman deeds practiced against the Sahrawis detained against their will in Tindouf, in the Southeast of Algeria, and relieve their sufferings through similar actions in  other European capitals and cities, such as Stockholm, Madrid, Amsterdam, London or Brussels.