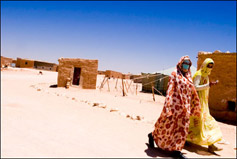 It is a situation which the world seems to have forgotten, that of the 90 000 Sahrawis living in the Tindouf camps, closely controlled by the Polisario Front and the Algerian army. Deprived of the freedom to move, to hold association meetings, being under strict daily control, the Sahrawis sequestered in Tindouf are threatened by a new insidious evil: oblivion. While their country of origin, Morocco, is only some kilometres away, the Sahrawis living in the camps managed by the Polisario Front Guerrilla can not think about enjoying their right of returning back, a right which is guaranteed by the International Human Rights Charter. What is the reason of this ubuesque situation? Some power stakes and a will of dominating the Maghreb by Algeria which is polluting the political situation of North Africa since almost 34 years.
In fact, this conflict, the last jerk of the cold war, should be dreaded as regard to the human damages it causes everyday, and the tragedy of families resulting from it. Families separated, children enlisted to play the role of apprentice soldiers since the age of twelve, when they are not sent to “the ideological reformatory camps” in Cuba. The international community which is swiftly moved when it concerns the Columbian FARC, should be aware that their North African counterpart the Polisario Front, is also a movement which is spreading terror and managing more than 90 000 hostages.