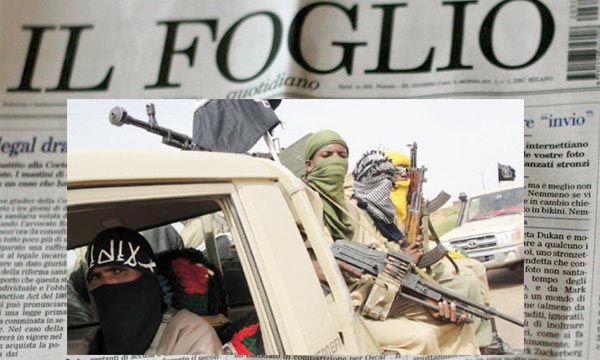 The Algerian government finds it more and more difficult to conceal the abuses committed by the Polisario leaders and the wayward paths taken by the separatist front, including its documented connexions with terrorist groups in the Sahel.
The Polisario’s ties with such groups have long been denounced by the media, think tanks and other specialized agencies and are no longer a secret, despite the efforts made by the Algerian intelligence services to hide the Polisario’s connivance with terrorists.
A widely circulated Italian newspaper has just dealt, in a recent story, with the Polisario’s documented links with a number of terrorist organizations (AQIM, Ansar Dine and Mujao ) operating in the Sahel strip.

“Il Foglio” newspaper reported in a recent issue that no less than 650 young Sahrawis from the Tindouf camps have been recruited by these terrorist groups and are reportedly involved in the kidnapping of Western citizens as well as in drugs and weapons trafficking.
Quoting an Arab intelligence source, the Italian newspaper says that twenty of these elements are said to be member of the “katiba” that has cold bloodily killed the two French journalists from RFI on November 4, near Kidal in northern Mali.
According to “Il Foglio,” other fugitives from the Tindouf camps have reportedly rallied the terrorist organization led by the Algerian emir Mokhtar Bel Mokhtar.
The author of the article noted in this context the persistence of infighting in the Tindouf camps, where “the deteriorating situation has reached intolerable limits under the corrupt and dictatorial leadership of Mohamed Abdelaziz.”
These conditions of permanent insecurity and repression have paved the way for the recruiters of AQIM and Mujao who found it very easy to enlist hundreds of disfranchised, desperate young Sahrawis, the newspaper wrote.
The newspaper decided to publish the story on the eve of the holding of a conference of “support for the Polisario” on November 15-16 in Rome to remind Italians that Sahrawis from Tindouf had been directly involved in the abduction of Rossella Urru on October 23, 2010 in Tindouf and in the kidnapping of Maria Sandra Mariani on February 2, 2011 in southern in Algeria.
These misdeeds are actually aggravated by the Algerian government’s decision to earmark $ 750 million to fund media campaigns, international conferences and other events to support the Polisario separatists’ theses at the expense of the legitimate interests of neighboring Morocco, wrote the author of the article.