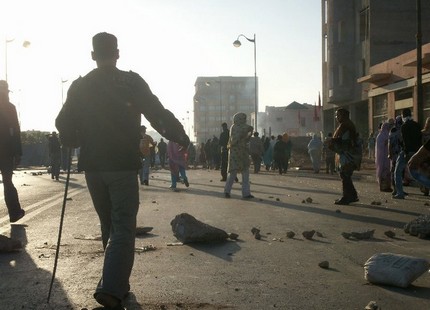 Moroccans are used to provocative acts staged by separatists in the southern provinces of the kingdom every time the Sahara issue is at the core of events.
The fact that the Security Council has declined to give to MINURSO a human rights watchdog mandate in Western Sahara could not be swallowed by the Polisario leaders and their Algerian protectors.
To prove at all costs that human rights are violated in the southern provinces of Morocco, the Polisario leadership called to the rescue the independence-seeking hard-liners living in these provinces to stir up trouble and discord in the big cities of the Sahara.
These hard-liners receive instructions directly from the Polisario headquarters in the Tindouf camps and their leaders regularly travel to Algeria to get instructions and money. Once back, they incite mobs to stage provocative and violent demonstrations and then claim they had been victim of repression.

Following the adoption of the Security Council resolution 2099 renewing the MINURSO mandate for one year, a hundred men and women staged unauthorized demonstrations over the weekend in Laayoune, Smara and Boujdour. The demonstrations, said to be peaceful, soon turned into violence and provocations.
The demonstrators insulted and hurled stones at the law enforcement agents who were at the scene and chanted break-away slogans.
The clashes resulted in some forty wounded on both sides, including eight military.
The irony is that after these incidents, videos shoot during the clashes and circulated on social networks show among the wounded protesters some attackers playing the role of victims. This is the case of Fatima Daoudi, aka Al-Ghalia who claimed she had been wounded in the hand by the police, while she actually cut her fingers when slamming the door of her house where she was running to hide. Other videos show some protesters, especially female, pretending to faint.
The Separatists have become experienced in such staging. They often invite international human rights activists and foreign journalists to take part in their demonstrations and later cite them as witnesses to Morocco’s violations of human rights. And the trick is done!