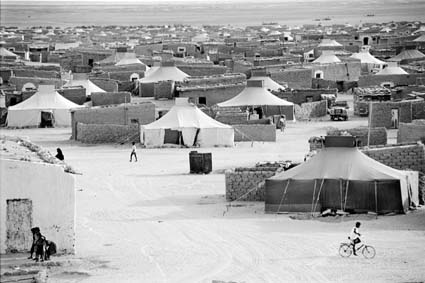 The Polisario, which has been under great pressure for several days, has put its militia on alert to abort opponents’ protest attempts against the leadership of the separatist Front, according to informed sources in Tindouf.
The anger of Sahrawis who are opposed to Mohamed Abdelaziz’s policy was amplified by the latest maneuvers of Algeria and the Polisario seeking to exploit the issue of human rights in Western Sahara in a bid to cover up the serious human rights violations suffered by the Sahrawis in Tindouf.
In these camps, that are isolated from the outside world and constantly held under the ruthless control of the Algerian military intelligence services (DRS), there is no room for dissenting voices.
No freedom of expression or free press and even less freedom of movement. The Sahrawis’ trips between the camps in Tindouf are closely monitored, while any request to leave the camps is subject to stringent conditions.

To deal with the growing frustration and anger of the young Sahrawis, the Polisario leaders have no other solution than repression.
Close monitoring of the elements that are most suspected of eagerness to escape is also a must, for the Polisario leadership and the Algerian DRS have still in mind the mass exodus of 2010 and do not want this to happen again.
To date, hundreds of Sahrawis have fled the camps in small groups and gone to the cities of Western Sahara where the rest of their families live.
This “Great Escape” had frightened the Polisario and Algerian leaders who feared losing the only trump card they were using to maintain their pressure on Morocco. They had since imposed tighter surveillance measures on the camps. The victims of these measures are the Sahrawis in Tindouf who are denied all rights to freedom of expression and freedom of movement.