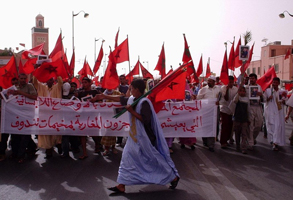 Many Moroccan Sahrawis who have been sequestered for decades in the refugee camps in Tindouf on Algerian soil, seize the opportunity of the family exchange visits, sponsored by the High Commissioner for Refugees (UNHCR), to resettle in their birthplace in southern Morocco. Recently, ten people from among the beneficiaries of the family visits program decided not to go back to Tindouf and to settle permanently in the Motherland. These new comers are from six families living in the provinces of Laayoune and Smara.
According to local authorities, five of these people visited Smara in the context of the operation that took place on November 7, while four others arrived in Smara and one person arrived in Laayoune on November 21 in the framework of another visit organized by the UNHCR between the Tindouf camps and the southern provinces of Morocco.

These people are from Ait Al-Hassan, Rguibat-Souaed, Oulad Daoud, Ahl Sidi Allal, Ahl Kassem Oulad Ibrahim Kassem and Rguibat lbihat tribes.
These people who freely chose to leave the Tindouf camps and to settle among their families in southern Morocco seized this unique opportunity of the family visits exchange to put an end to the ordeal they endured for many years in the Tindouf camps, where, they say, they were parked in the midst of the Algerian desert, completely isolated from the rest of the world.
They claim to have been victim of serious human rights violations, torture, beatings and other inhumane practices perpetrated by the Polisario leaders and torturers. Investigators and delegates of many international human rights organizations have documented evidence as to these practices, the returnees say.
The 22nd trip organized by the UNHCR from the Moroccan Southern provinces of Laayoune and Smara to Tindouf and from Tindouf to these provinces was held on November 21. According to a statement from the MINURSO, 24 families consisting of 153 people flew from Laayoune and Smara to Tindouf camps. In return, 27 families totalling 154 Moroccan Sahrawis living in Tindouf camps visited the southern provinces. This was the last trip planned by the UNHCR for year 2012.
Since the program was launched in March 2004, the number of people who have benefited from the family exchange program amounts to 16,284 (7,713 from the Moroccan southern provinces and 8,571 from the Tindouf camps).