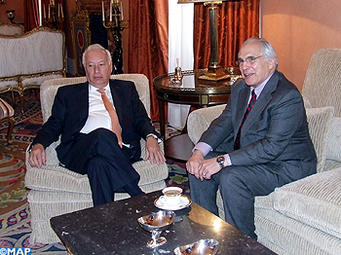 The status quo in the Western Sahara issue is not a solution in itself. It only protracts the conflict. As the UN mediator Christopher Ross said, the status quo regarding the final status of Western Sahara is “untenable” and “dangerous” especially as extremism, terrorism and organized crime are a growing threat in the Sahel region.
Ross, who was visiting Madrid, part of a tour that has already taken him to Morocco and, for the first time, to the Moroccan southern provinces, to Mauritania, to the Tindouf camps and to Algiers, warned that If the current situation drags out, violence could resume and could entail tragic consequences for the Sahrawi people (in the Tindouf camps) and for the whole of North Africa.
“If some are tempted to say that it is too risky to revive peace efforts and that the status quo guarantees at least stability, I am sure this would be a serious mistake, particularly because it (the status quo) is threatened by mounting extremism, terrorism and crime in the Sahel region,” argued Christopher Ross.

According to the UN mediator, the dispute needs to be settled. “This is possible if there is a genuine willingness to engage in dialogue and to show resolve to find a compromise solution acceptable to all,” he said.
Part of the mission entrusted to him by the UN Secretary General, Ross is also scheduled to visit Paris, London, Washington and Moscow in a bid to put back on track the negotiations for a final settlement of the Sahara conflict and garner the international community’s support to the UN efforts.
Western geo-strategy and security pundits have repeatedly warned that the status quo in the Western Sahara issue was advantageous only to the Polisario leaders who want to perpetuate the conflict to continue embezzling the humanitarian assistance destined to the camps populations. For these experts, the Sahrawi refugee camps in Tindouf in the Algerian desert are a fertile breeding ground where the recruiters of the terrorist networks roaming in the Sahel strip, especially in northern Mali, find an easy prey.