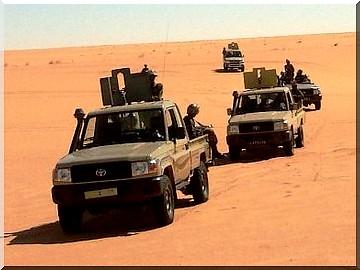 The Polisario leaders no longer know which way to turn. With the unprecedented drop of humanitarian aid, an increasing number of idle young refugees try, by all means, to get rid of the grip of their leaders. Many of these youths, frustrated by enduring unemployment, lack of sources of income and lack of any bright prospects for the future, since the Polisario and Algeria hamper any settlement of the Western Sahara issue, prefer rather to throw themselves into the arms of traffickers of all kinds and of the terrorist groups roaming in the Sahel, sources from Tindouf said. News circulated these past days by pundits and Western media have stated that hundreds of Sahrawi refugees left the Tindouf camps to join Islamist movements in northern Mali, hoping to make some money out of the promised hiring bonuses. Monday, the Director of the International Center for terrorism Studies (ICTS) Yonah Alexander warned the international community against the danger of the collusion between the Polisario and the armed groups affiliated to Al-Qaeda in the Islamic Maghreb (AQIM) to security in the Maghreb and the Sahel.

The Polisario, whose collusion and complicity with the terrorist group AQIM was documented and also evidenced by the kidnapping of Western citizens from the Tindouf camps that are under its control, became “an extra force” in the war declared by AQIM and MUJAO, warned the director of ICTS, an offshoot of the Washington-based Potomac Institute. According to the American expert, this phenomenon is “the logical result of the radicalization of the Polisario and the deterioration of the living conditions in the camps of Tindouf, where people are forcibly sequestrated by the Polisario militia.” In view of the separatism and terrorism danger threatening regional stability and security, the international community can not afford to stand still and look helplessly while focusing all attention on Syria, said Yonah Alexander. The Polisario separatists and Al-Qaeda terrorist group are partners in an alliance that is destabilizing the whole Maghreb and Sahel region.