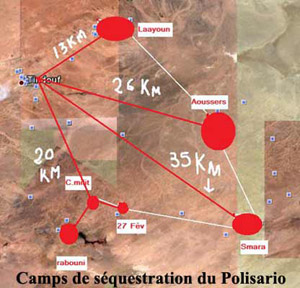 In the camps of Tindouf, the double standards policy and discrimination are the rule when it comes to the treatment of refugees. Algerian authorities thus lavishly bestow their generosity on the Polisario leadership, while the unfortunate Sahrawis living in the camps are subjected to all kinds of discriminatory practices.
The latest measures imposed by Algiers on the Sahrawis going to the nearby city of Tindouf are an illustration of these discriminatory practices, according to testimonies by Sahrawis from inside the camps.
Drastic limitations have been imposed on the Sahrawis trying to purchase, in the city of Tindouf, products that they cannot find in the camps. Fruits, vegetables, soft drinks or fuel are subjected to an incomprehensible rationing when the purchasers are Sahrawis. Beyond 12:00 am, Algerian authorities in Tindouf prevent vehicles with Tindouf registration plates from purchasing gas.

Besides, Sahrawis are not allowed to purchase more than 45 liters of fuel at a time. These inexplicable limitations would not have been possible without the Algeria-imposed isolation of the Sahrawi camps, according to the same testimonies. The international independent media are totally banished from the camps and therefore cannot report on the blatant violations of basic human rights prevailing there. The tough control exercised on the camps by the Polisario, which claims, with Algeria’s support, the independence of the Western Sahara, smothers all freedom of expression and of movement.
Human Rights Watch and Amnesty International denounce periodically the “violations of human rights committed by the Polisario”, particularly against dissidents such as the former Polisario security executive, Mustapha Salma, or artist Allal Najem.
Amnesty had tried to get entry visas to Algeria to probe cases of human rights abuses reported in the camps of Tindouf, but in vain. Every time, its requests were categorically turned down by Algiers. How long will Algeria be able to hide to the world the unspeakable living conditions in the camps of shame?