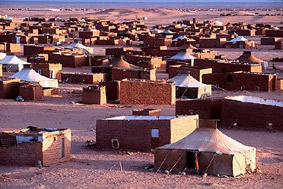 The young Sahrawis in Tindouf and elsewhere, have taken the opportunity of  the holding of the 13th Polisario congress to denounce the suffering lived by thousands of Sahrawi refugees suffering since decades under the yoke of sequestration, isolation and suppression in all its forms in Lahmada camps. Being convinced that nothing would change in the structure of the old guard of the everlasting Polisario chief, Mohamed Abdelaziz, some voices in Tindouf camps, like in the ranks of the Sahrawi diaspora abroad, have denounced these leaders’ takeover of the centers of decision, presiding over the destiny of the Sahrawi populations, especially, on the mode of management of international humanitarian aids which are the object of many misappropriation acts.

In parallel to the sit-in observed these last days in front of the Polisario HQ in Rabouni, by dozens of young Sahrawis to denounce these violations and injustices of which are suffering the populations in Tindouf camps, the group of the young people from Laaroussiyine tribe in Spain and in Tindouf has itself also condemned the dramatic life conditions of Sahrawi refugees and call the international community to protect them against he “injustice and tyranny of the Polisario leadership”. In a release published Saturday, the group specifies to have addressed letters in this context, to the UN Secretary General, Ban Ki Moon, to the president of the European Parliament, Jerzy Buzek and to the UNHCR, Antonio Guterres, so as to inform them about the “painful and unacceptable situation in the refugees camps of Tindouf, lasting for more than 35 years of sufferings, date of the beginning of the Western Sahara conflict. This “humiliating” situation in Tindouf camps in the South of Algeria, adds the same source, informs “clearly on the incapacity of the Polisario leadership to achieve the Sahrawis aspirations and to find a solution to this old Sahara conflict”. The present Polisario leadership, believes the same source, has become “famous with its becoming rich at the expense of the Sahrawis’ misery and it is far from representing the Sahrawis. In their release, the young Sahrawis from the Laaroussiyinnes tribe believe that taking into consideration the present situation, it becomes necessary today to “revolt against injustice, tyranny and exploitation so as to change the bitter reality lived by our families”. Besides, the group denounces the manoeuvres having marked the preparation for the so-called 13th congress of the Polisario front to maintain the leading elite and to make the statu quo situation continue, calling to put an end to “this kind of parodies” and to make the ambitions of Mohamed Abdelaziz and his surroundings fell through, calling for liberty and dignity.