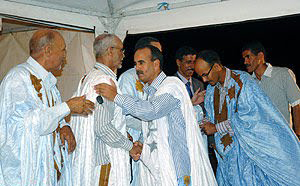 The situation is explosive in Tindouf camps controlled by the Polisario. It is the first evidence collected from a fluent member of the Ouled Dlim tribe, who has just escaped from the Sahrawi refugees’ camp of Lahmada. According to Mohamed Yislem Ould Al-Kouri Ould Souilem, one of the shioukhs of the identification operation in Tindouf camps, who has joined in the end of last week his homeland, Morocco, after many months spent in Spain, the situation in the camps continues being worse with the revolts of the Arab Spring. Arrived on Sunday evening to Dakhla, Mohamed Yislem, who was a teacher before being promoted to inspector and education regional director in Tindouf, explains his choice of returning to Morocco, considering his conviction that the only solution to the Sahara conflict resides in the Moroccan autonomy initiative.

Through this process, he has said, the Sahrawi inhabitants of the Southern provinces, will have the possibility to manage their own affairs within the Moroccan sovereignty. The Polisario front, he supported, is a movement led by Algeria to make this problem continue under the cover of misleading slogans of self-determination which aim only to undermine the integrity of Morocco and serve the interests of the Algerian leaders. Recalling the life conditions of the Sahrawi populations in Tindouf camps, Mohamed Yislem has deplored “the climate of oppression, suffering and insecurity prevailing in these camps and the state of siege imposed to these populations”. This tense atmosphere, he said, is fed with frequent misappropriations of humanitarian aids and the presence in the camps of criminal groups and arms and drugs traffickers. Facing this deterioration of the situation in the camps, he explained, the Polisario increases its manoeuvres fearing popular revolts taking into consideration the events that took place in Libya and other Arab countries. Mohamed Yislem Ould Al-Kouri did not hesitate to declare the Polisario and Algeria leaders responsible of this deterioration, calling the international community and the Arab sister countries to intervene immediately, so as to raise the siege imposed on the inhabitants of Tindouf camps and to allow them to freely rejoin Morocco. A call which may not be heard as hundreds of other calls made in favour of the populations living in distress since more than three decades.