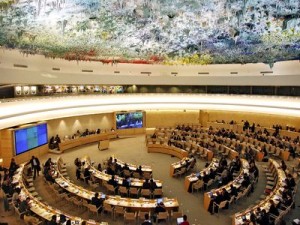 The NGOs move against the silence and inertia of the UN bodies in front of the humanitarian tragedy lived by thousands of Sahrawis sequestrated against their will in Tindouf camps in the Algerian desert. The international NGOs representatives deeply grieved by the sad destiny reserved to these populations, have taken the floor Wednesday in the debates of the 4th UN committee in New York, to denounce the  “despicable” life conditions imposed by the Polisario in Tindouf camps. They have, at the same occasion, reiterated their support to the Moroccan autonomy plan which they have qualified of being a « courageous » initiative that can led to the settlement of a conflict which has lasted for a long time. The option of a large autonomy under the Moroccan sovereignty constitutes, as was stated by Anna Maria Cervone, from the international of Christian democratic women, a “suitable solution to provide the Southern provinces with large prerogatives and allow its populations to manage their own affairs”. “We will never insist enough on the necessity to seize this proposal for the final settlement of the Sahara problem and put an end to this tragedy which continues in Tindouf camps”, has underlined Maria Cervone who says to be “surprised” by the time this “artificial conflict” has lasted.

She has also warned against the threat represented by the persistence of such a conflict in the heart of North Africa, “with the presence of the Polisario armed militia and the circulation of arms without any control”. This situation, she warns, creates the risk of transforming all  the region “into a fertile land for the establishment of armed groups of all kinds”. For the president of the British NGO “Family Protection”, Jane Bahaijoub, the autonomy plan as proposed by Morocco is “the only viable solution” for the populations sequestrated in Tindouf camps. “I firmly believe that the only solution for the populations sequestrated in Tindouf camps, resides in the Moroccan autonomy proposal”, has she declared, denouncing the systematic violations of human rights in these camps and the ambiguous policy followed by the Polisario. In her intervention, Nancy Huff, from the American Organization “Teach the Children International”, has required the spreading of concrete information on the situation in Tindouf camps, so as to progress on the settlement of the Sahara issue with real solutions. “The information provided by Polisario are not viable”, she stated, giving the example of statements according to which all the children living in Tindouf camps, receive education, while some studies led by Oxford University have proved the opposite. This black-out imposed in Tindouf camps, by the Polisario with the complicity of the Algerian authority has been denounced many times by international human rights NGOs which meet all kinds of problems to accede to the camps and get in touch with their inhabitants.