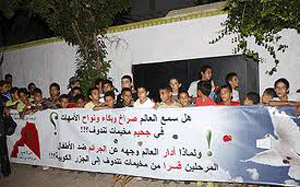 After having been suppressed lately in Rabouni, by the Polisario armed militia, the young Sahrawis have changed destination and choose to observe a sit-in in front of the UN HCR, in the approaches of Tindouf camps in the South-West of Algeria. The angry young Sahrawis have gone to denounce in front of the UN agency, the inappropriate outbursts taking place in these Tindouf camps.
The protesters have given, to the HCR executives, a letter of protest in which they call the international community to take notice of the overtaking and atrocities of which are victims the populations in Tindouf camps. Among the recriminations of which are complaining the Sahrawis: torture, slavery, nepotism, corruption and legal proceedings against innocent people, besides personal enrichment of Polisario held for life leaders at the expense of the sequestrated populations through international humanitarian aids.

In this call, the group of young protesters accuse also the Algerian authority of complicity with the Polisario which “does not take into account but its sole interests and those of whomever it serves”. They have also launched an SOS  call so that the populations of Tindouf camps would no more suffer from injustice and iniquity. The young Sahrawis have made all the governmental and non governmental organizations, at their head, the UN Organization and the UN HCR, responsible of their security and that of their relatives, underlying that their sit-in in Rabouni, nearby Tindouf, will continue till the realization of their legitimate claims.
The Polisario military group preserves in its manoeuvres in the wake of recurrent scandals having established the confirmed involvement of its mercenaries in the traffic of human beings and drugs in the region of the Sahel and their complicity with the armed terrorists organizations which threaten the security and stability in the whole region, particularly, in the cities of the Western Sahara under the Moroccan sovereignty.