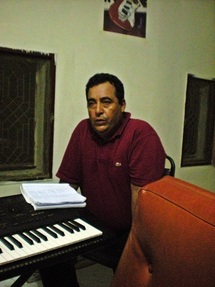 Finally, what should have happened happened. The Polisario dissident artist Najem Allal was himself and his companions been brutally evicted. The tent set up in Rabouni and serving as a demonstration place since many weeks, has been demolished by force by the Polisario militia despite of the general denunciation in Tindouf camps. The only fault of the  Sahrawi  poet and singer is to have criticized the Polisario leadership in his songs. His last album “the youth of change”, has become very popular among the young people in these camps which are strongly controlled by the Polisario under the Algerian generals’ supervision. Scared out of their wits by the danger which the artist tent represented after becoming the meeting place for all the young sahrawis opposing the Polisario leadership, the chief of the separatists, Mohamed Abdelaziz did not hesitate to order its putting down. The young people in the camps are strongly against the Polisario leadership which they accuse of blocking negotiations about the future of the Sahara at the service of the Algerian political agenda in the region.

They have been constituted in a movement called “the Sahrawi revolutionary youth”. The young Sahrawis in Tindouf have been noticed while protesting against the repression of the other Polisario dissident Mustapha Salma. The latter has been forced back from Tindouf camps for having publicly supported the Moroccan autonomy plan for the Sahara. In front of such a repressive drift, the Sahrawi association for artists, which headquarters are in Laayoune, has strongly denounced this aggression against the dissident artist Najem Allal protesting peacefully in front of the HCR headquarters in Rabouni headquarters. The Association has insisted on the right of the singer to freedom of expression in Tindouf camps, and reaffirmed his solidarity with the suppressed singer. On his side, Najem Allal has addressed a protesting letter to the UNHCR through the HCR office in Tindouf camps. In this letter, he denounces the relentlessness to which he is submitted by the Polisario. He requires also, like all the other Sahrawis in Tindouf camps, to enjoy freedom of expression and movement.