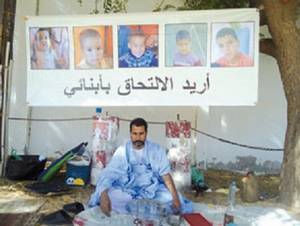 The family of the Sahrawi dissident Mustapha Selma Ould Sidi Mouloud, at present in exile in Mauritania, has paid dearly for a sit-in organized these last days by his elder son, Mohamed, in front of the delegation of the UN HCR ub Rabboni, to claim the return of his father home in Tindouf camps. Following the sit-in of Mohamed Ould Sidi Mouloud, eleven years old, who wanted to protest against the forced removal of his father in Nouakchott, the Ould Sidi Mouloud family residing in Tindouf camps was attacked by  a gang financed by the Polisario leaders. At his return from Rabouni, the father Mustapha Selma Ould Sidi Mouloud declared on the phone, from Nouakchott, Mohamed was attacked by some individuals at his return to the house where his mother lives with his four brothers and sisters in Laayoune camp. At night, he specifies, their house was attacked by these people who have burgled it and have threatened his mother and children.

The latter have also received some threats by phone forbidding them all forms of protest against their separation from their father who was driven away by the Polisario leadership for having claimed in public, his preference for the autonomy plan that Morocco proposes as a solution for the final settlement to the Western Sahara conflict. The Sahrawi dissident and former Polisario police chief, Mustapha Selma who fears for the physical integrity of his small family, has made an urgent call to the UN Secretary general, Ban Ki-Moon and to all the UN specialized agencies, among which the HCR, to guarantee the protection of his family members in Tindouf camps. “I put the responsibility down to these bodies, for any physical or moral prejudice from which my family may suffer in Tindouf, and I ask them officially to provide the necessary protection for them” has declared Mustapha Selma. The Sahrawi militant has also called all the Sahrawi notables to help his family, among whom his son Selma and his daughter Meryem who are ill and his wife who has some difficulty to satisfy the everyday needs of his five children. During his sit-in in Rabouni, which is also the city hosting the headquarters of the separatist movement leadership, the young Mohamed Ould Sidi Mouloud has given, to the HCR delegate, a letter addressed to the UN Secretary General Bank Ki-Moon, in which he asks, in his own name and on behalf of his brothers and sisters, the help of the UN and all the persons passionate about freedom, to speed up the return to Tindouf of their father from whom they were separated for more than 18 months. “We say to the HCR, myself and mes brothers, that one year and a half of forced separation from our father, is a crime against our family ». That was the gist of what Mohamed Selma wrote in his letter. Since June, Selma Mustapha who has refused an offer from the HCR, consisting of a  political asylum in a European country, is making an open si-in in Mouakchott and is still waiting for the approval of Algiers’ authorities and the Polisario leadership to allow him to rejoin his family in Tindouf.