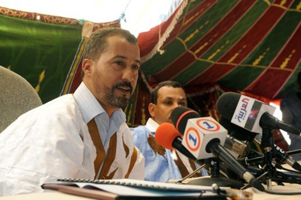 Between returning home in Tindouf camps and exiling in Finland, the Sahrawi militant Mustapha Salma Ould idi Mouloud has unequivocally decided to chose the first option, with all the risks that this destinations include. The former Polisario police executive who has proclaimed his support to the Moroccan autonomy plan, at his return in August 2010 from a family trip to Smara in the South of Morocco, has got a proposal from the HCR offering him to exile to Finland. After his release by the Polisario torturers following 71 days of detention in a secret place in the Algerian desert, Mustapha Salma has been temporarily set up by the HCR in Nouakchott.

The Polisario dissident who was claiming no more than his return to his wife and children in Tindouf camps, has started since fifteen days a sit-in in front of the HCR headquarters in the Mauritanian capital. “After six months of forced absence from my family and my country, without making out any solution to this tragedy, I was obliged to make it known to the HCR”, has declared Ould Sidi Mouloud to explain his gesture. He even hanged up in the place of his camping, two banners, one with the photos of his five children, the other claiming his return to his family and country. At the beginning of this week, he was accosted by the HCR representative in Nouakchott, Nada Assaad Merheb, who told him that “a sustainable solution” has been found for him in “a European country”, specifying that the HCR did not have any “other choice to propose him”.
When rejecting this offer of asylum in Finland, Mustapha Salma has declared to the press to have been betrayed by the HCR. The latter, has he specified, “proposes to me an exile in Finland which has accepted to receive me, but I refuse, because this makes me far from my country, limits my political action and deprives me of my family”. At the beginning, the HCR executives “ promised to find me asylum in Spain, Mauritania or in Morocco”, has declared Ould Salma, stating having highly been surprised when receiving the offer to go to Finland.
The Sahrawi dissident has been recuperated on November 30, 2011 by the HCR to the frontiers between Mauritania and Algeria after his release by the Polisario militia accusing him of “high betrayal” for having adhered to the Moroccan autonomy proposal. While rejecting the HCR offer, Ould Sidi Mouloud assures to be strongly determined to continue his movement of protest till wining the case. He said to be ready to assume all the consequences of his eventual return in Tindouf camps, if he is authorized to return there.