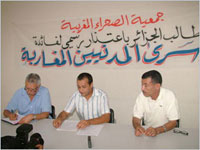 Following the announcement of the “Moroccan Sahara Association” (ASM) to organize a peaceful march towards Tifariti on January 27, where the last congress of the Polisario Frente was held, several members of the revolutionary movement affirmed their fear that this walk will lead to a “resumption of the armed struggle”. How can this be? Which meaning of the word “peaceful” the masters of Tindouf did not get?
For weeks now, the leadership of the Polisario Frente is threatening to “resume the armed struggle”. Does the Polisario really have the human and material means to relaunch the guerrilla? Probably not. However, the debate on the resumption of the weapons is an indicator of the Polisario Frente level of weakness while  the 4th round of direct negotiations with the Kingdom of Morocco, is scheduled for next March.
Indeed, if the Polisario Frente was really confident, as it is proclaimed in each of its official statements, why the need for the threats? No explanations, except fear of seeing the rare partisans who still support it take the Moroccan side. A more excavated analysis would show that the crimes and other tortures made by the Polisario Frente within the camps of Tindouf can be regarded as “acts of war” if a peaceful resolution of the conflict had to suddenly take place.
Indeed, after complaints by sahraouis victims of torture, the polisario leadership tries to find a way which could prevent them from being jailed…