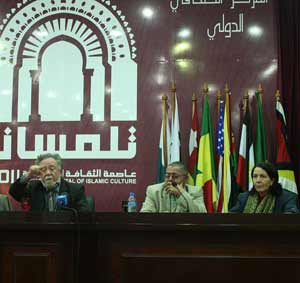 Morocco has boycotted the inaugural ceremony of the event: « Tlemcen, capital of the Islamic culture 2011 ».  This boycotting, the members of the Moroccan delegation led by the Culture Minister, Bensalem Himmich, have explained it by the presence in Algiers of the representative of the so-called Sahrawi Republic “SADR”, among the guests. The opening ceremony was scheduled in the evening of Saturday April 16th, by President Abdelaziz Bouteflika. Many Arab and Islamic delegations present at Tlemcen, did not hesitate to denounce the presence of the Polisario representative, knowing that the so-called Sahrawi Republic “SADR” is neither a member of the Islamic Educational, Scientific and Cultural Organization (ISESCO) nor of any of its subsidiary agencies. The Moroccan delegation has, on the opposite, attended on Friday, a reception presided by the  Algerian Minister of Culture, Khalida Toumi, to which only delegations of ISESCO member states were invited.

Questioned on Sunday by some journalists present at Tlemcen about eventual tensions between Algiers and Rabat, President Bouteflika has ensured that “there is no problem between Morocco and Algeria”. Nevertheless, land borders between the two countries are closed since 1994. For the Algerian Head of State, the only problem opposing the two neighbour countries is the Western Sahara Conflict. This territory conflict, has he stated, is “a UN problem”, believing that “it should not block the strengthening of the bilateral relationships”. But in reality, things are different from the declarations made by Algerian officials, as stated by observers. The Algerian diplomacy does not spare any human, material or financial effort to throw a spanner to Morocco. It looks, at any price, for a way to assert the Polisario separatists’ thesis and hinders the legitimate claiming of Morocco and its right to territorial integrity. President Bouteflika who inaugurated the royal palace of Mechouar, one of the most famous monuments of Tlemcen, has moreover, stated that “Morocco is a neighbour and sister country and we should cooperate with it”. He has even recommended to the Algerian executives in charge of tourism and the protection of the national historical patrimony, to appeal to Moroccans and Spanish skills and cooperation.