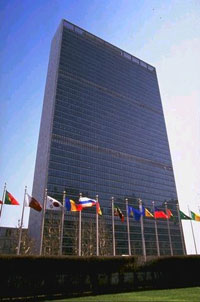 The Algerian diplomats at the United Nations in New York were in great excitation after the « leaking out » of Ban-Ki moon report which was to be presented to the Security Council on the 15th April, in expectation of the MINURSO mandate renewal. Huge and justified fury overcame Polisario representative, Ahmed Boukhari.  This sudden commotion was provoked by the absence of any reference to the introduction within the MINURSO mandate of a mechanism for human rights control.
The passages related to human rights aspect were limited to referring to the interest granted by the UN to the human rights issues in the region. More than that, the leaked passages of the report insist on important details which have overwhelmed the Algerian diplomats. Precisions such as the non-use of arms by Moroccan security forces, during the demolishing of Gdem Izik camp in November 2010.

The Algerian diplomats flanked by some Polisario representatives have thus vainly moved heaven and earth in the UN New York headquarters’ background to try to remedy to the matter. This is not the first time the Polisario and Algeria get confused about the human rights aspect. During the last informal negotiations in Malta, the separatist front had, at the last minute, decided to go on ahead to introduce this question. Guided by the Algerian diplomats, the Polisario has finally changed its mind after being aware that its defense for human rights was going to be livid with the case of Mustapha Salma.
This Polisario dissident who was imprisoned and tortured before being forced back at Tindouf camps for having dared to defend the Moroccan autonomy plan for the Western Sahara.