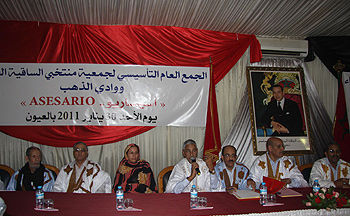 The network supporting the Moroccan autonomy proposal for the Western Sahara continues extending within and outside the Kingdom to the great displeasure of the Polisario and its target separatists. A new association called “Asesario” (the elected representatives of the Sakia El Hamra and Oued Eddahab), has just been created on Sunday 30th January in Laayoune, where its constitutive general assembly took place. The Asesario has for objectives to defend the autonomy plan proposed by Morocco aiming at putting an end to the artificial conflict around the Moroccan Sahara. The presidency of this new association was entrusted to Hamdi Ould Errachid, a descendant of the influential  Reguibat tribe, a native and mayor of Laayoune city. This association was created by many Members of the Parliament representing the Southern provinces and regroups Members of the Parliament, local elected representatives and members of the professional chambers in the Province of Laayoune, Tarfaya, Boujdour, Smara, Oued Eddahab and Ousserd.

The association has also set as objectives stated in its by-laws, the contribution to the economic, social and cultural development in the Southern provinces and the taking of any action that may reinforce the national unity. It has also set for missions to defend the public freedom and Human rights, support the elected institutions, contribute to their development and improve their services. In his intervention during the constitutive assembly, the President of the Asesario, Hamdi Ould Errachid has specified that his association is apolitical and open to all the elected representatives from the different political parties. The creation of this association falls within the  scope of actions undertaken by the Moroccan associative body to defend the territory integrity of the Kingdom, to contribute to the resolution of social  issues related namely to employment, lodging and promotion of the region socio-economic development. The creation of this association comes also to make up for the lack of supervision observed concerning the young people but especially to thwart the propaganda and the thesis of the Polisario separatists.