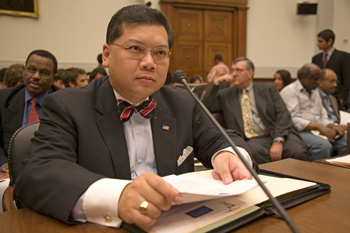 An increasing number of governments and personalities do no more doubt the involvement of elements from the Polisario front in the terrorist activities of Al-Qaïda network in the Islamic Maghreb (AQMI). The Sahel states do not always have the means to control their territories. The Sahelo-Saharan band has become these last years, the theatre for the kidnapping of many foreign citizens, namely Spanish and French ones. Kidnappings which were made easier by some elements from the Polisario, set up in Tindouf camps, at the South-West of Algeria and who have a good knowledge of the area. The involvement of some armed members of the Polisario, which arms were provided by Algeria, was confirmed on Wednesday, by the First Vice-President of the national committee for the American foreign policy, Peter Pham.
Certain of these elements, has he specified during a meeting organized at McDaniel College of Westminster (Maryland State), were arrested by the Mauritanian authorities for acting in complicity in the kidnapping of three Spanish humanitarians, during November 2009.

Intervening in this meeting-debate having as a topic : “violent extremism in North Africa and the Sahel region”, has reminded, in connection with the subject, the Amercian expert who stated that the so-called Omar Sidi Ahmed Ould Hamma, alias Omar Sahraoui, was arrested during the last month of February in Mali, based on information provided by the Mauritanian security services which were making investigations about the kidnapping of the three Spanish people. The suspect, has he added, was extradited afterwards in Mauritania to be judged.
According to some information collected by Peter Pham, Omar Sahrawi and other elements from the Polisario, were putting their knowledge of the land (the Sahel) at the disposal of terrorists, hostages’ kidnappers, drug trafickers and smugglers. They are of course generously rewarded by the men of Aqmi.
In the context prevailing in the Sahel region, Peter Pham, writer of many essays on Aqmi, thinks it is “of the USA’s interest and the parties directly involved, to find a realistic political solution to the Sahara issue”. The Moroccan large autonomy proposal for the Western Sahara, has he said, would contribute to the final settlement of this conflict.  To this effect, Pham has reminded that the former personal envoy of the UN Secretary General, Peter Walsum, has himself concluded that independence is not a realistic option.