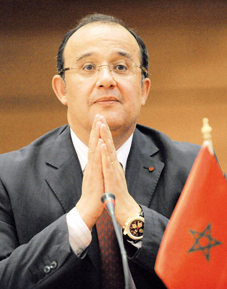 The Moroccan diplomacy came back to the case of the dissident who had the courage to say no to the separatists’ thesis. The Moroccan government convinced that the kidnapping of Mustapha Salma Ould Sidi Mouloud is but a case among thousands others attesting the rejection of obsolete dictatorial methods going back to the seventies of the last century. Morocco has already vigorously denounced this illegal, illegitimate and unacceptable act, as it has denounced the reprisal measures taken against members of the separatist movement dissident’s family. For the Foreign Affairs Minister, Taib Fassi Fihri, this affair is an obvious proof of the large favourable echo provoked within our sequestrated brothers in Tindouf by the autonomy initiative, as a historical opportunity that the Moroccan sovereign has proposed as a final solution to put an end to the artificial regional conflict which has too much lasted. A solution, as he stated, which can put an end to decades dominated by the unique idea, despotic military indoctrination, deprivation and division among the Sahrawi refugees in Tindouf.

Fassi Fihri who took the floor on Wednesday in the Chamber of Representatives, declared that the Polisario leadership had the impertinence of claiming the right to deny the quality of refugee to Mustapha Salma, while it is normally up to Algeria duly entitled, in conformity with the humanitarian international law, to accept or refuse the presence of whatever refugee on its territory. And as Mustapha Salma lives in Tindouf camps as a refugee, his right to benefit from protection and assistance falls within the exclusive power of the UN Refugee Agency. In the case of Mustapha Salma, Morocco has always expressed its flat refusal of the ill-founded allegation that the other parties (Polisario and Algeria) have tried to assert, to exploit this issue and pass on misleading slogans. Through these slogans, they pretended that Mustapha Salma has been arrested in the so-called « liberated territories » and should appear before the so-called « courts » of the ghostly Democratic Sahrawi Arab Republic, to respond at what they qualified as « violation of the Sahrawi criminal law ». The international community can not be easily deceived. It knows perfectly well the specific nature, the particular conditions and the clear legal situation of the area located at the East of the Defense system. But as long as these crimes and torturers are not punished, Polisario would continue inundating the international scene with its lies.