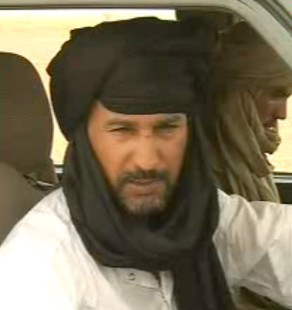 The imprisonment in secret of Mustapha Salma Ould Sidi Mouloud starts making echos in the Spanish media. The unanimous reproof  in Morocco and at the international level, Amnesty International and Human Rights Watch in the lead, seems to have its impact. Thus, some Spanish agencies such as El Mundo and the EFE agency have given the floor to former leaders of the Separatist Front, who have joined Morocco after having been aware of the  Polisario unbelievable hoax, made completely by Algiers’ generals. Among these former Polisario leaders, Ahmed Ould Souilem, a founding member of the separatist group, who has joined Morocco in July 2009.
He castigated the imprisonment of Mustapha Salma Ould Sidi Mouloud, kidnapped on September 21st, by the Polisario for having simply expressed his opinion in favor of the Moroccan autonomy plan for the Sahara. The false announcement by the Polisario of his release is a simple manœuvre intended to divert the media and NGOs attention, as nobody knows what happens to Mustapha Salma, « including his own family », has confirmed the former Polisario senior executive. Hammati Rabbani, an other former leader of the Polisario, who was the so-called « Minister of Justice » of the separatist group before joining Morocco in June 2005, has also denounced the usurpation of the Sahrawis’ will by a small group of separatists who are far from representing the Sahrawis.

The two former Polisario executives have underligned that the persecution of Mustapha Salma is part of the well-tried methods used by the Polisario to hush up the dissidents’ voices. Voices which have become more heard since the initiative taken by Morocco to propose the autonomy plan for the Sahara in order to put an end to the conflict arbitrarily maintained by the Polisario, upon Algeria’s instigation.