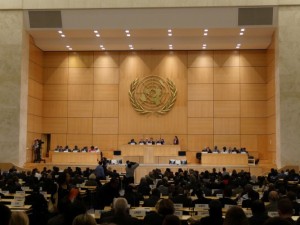 The census is “a prerequisite for sustainable solutions” and this is especially true in the case of the Tindouf camps populations whose situation is unique in the world, a Moroccan diplomat said in Geneva on Tuesday before the UN High Commissioner for Refugees (UNHCR).

Speaking in the context of the high level segment of the Executive Committee of the UNHCR, Morocco’s Chargé d’Affaires in Geneva Hassan Boukili stressed that the commitment to humanitarian assistance, protection and sustainable solutions requires the identification and registration of refugees. This is a prerequisite that should apply primarily to the Sahrawi populations that have been sequestered in the Tindouf camps for 40 years and that constitute a unique case of refugees who have never been identified and registered, he said.

Morocco is member of the Executive Committee, a UNHCR governing body, which is holding its High-level segment this year on the topic: “the strengthening of international cooperation, solidarity, local capacity and Humanitarian Action for refugees in Africa.”

Hassan Boukili noted in this regard that the international community must address the causes and obstacles behind the persistence of refugee-related crises, citing in the case of the Sahrawi refugees the militarization of the Tindouf camps and the exploitation by Algeria, the host country, of the humanitarian plight of thousands of Moroccan Sahrawis. Algeria uses the Sahrawis to serve its political and geo-strategic agenda and to fulfil its separatist and leadership aims, he said.

The Moroccan diplomat, who insisted on the urgent need to conduct a census of these populations, called on the UNHCR to set as a strategic goal in Africa, beyond the current assistance and protection efforts, the dismantling of all refugee camps in the continent, including the Tindouf camps in southwest Algeria.

He also expressed Morocco’s deep concern over the very high number of refugees and internally displaced persons in Africa and over the protracted situation of some refugees as is the case of the Sahrawis who have been held against their will for almost four decades in the Algerian desert.