On August 30, 1976, the Polisario defined the doctrines of what will become a huge and constant violation of human rights during nearly 30 years.
In a document entitled “National General Program” created during the 3rd congress, the Polisario, under the enlightened banner of the “Marxism-Leninism-Maoism”, decided to systematize the use of conditioning to manage the sahraouis held in the camps. 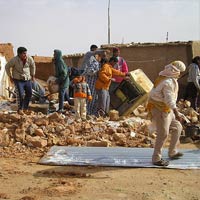 The “National General Program” stipulates: “…It is also required to widen the bases of the popular armed forces unceasingly and to improve their knowledge regularly so that they can ensure the defense of the Revolution, the country and the assets of the people and to make it possible for the masses to hold the weapons by training them militarily. ” a little further, the document lays down the creation of political police chiefs , moderately entitled “executives politico military”: “We should create reserves, in accordance with the principle of the necessary development of “clean” forces of organized people, armed ideologically and militarily, to reinforce them constantly because they constitute the power able to achieve the tasks of the Revolution in the current stage and the stages to come…It is necessary for us to mobilize all the people, to train them militarily and to arm them ideologically; to build an involved and organized modern force having a high knowledge of the combat and modern weapons, equipped with all the bodies and institutions necessary specially with highly qualified politico military managers, applying the principle of the conscious discipline and stressing on the rise of the cultural level and policy of the combatants and officers. It is an essential task there that it is necessary to complete. »
This obscure, impenetrable language however, constitutes the base of the authoritative modes inspired by the guerrillas who produced the results that we all know in Cuba and North Korea.
With the fall of the Berlin Wall, the world became aware of the danger of these speeches which hide in fact an unsaid reality. In the name of the “revolution”, a police force of the consciences took place in the refugees’ camps …