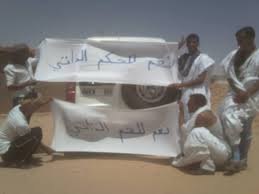 The Polisario is seriously challenged within its own headquarters in Tindouf, Algeria, as illustrated by the bold initiative of several opponents who hoisted Moroccan flags and distributed leaflets supporting the Morocco-proposed initiative on the Western Sahara autonomy.
The daring action has been taken by many young Sahrawis member of several movements that are fiercely opposed to the Polisario and to its Algerian mentor. These young Sahrawis, frustrated by 40 years of mismanagement and ineptitude, have finally reacted vigorously against the tyrannical grip of the Polisario. They blame the separatist front and in the first instance its leader Mohammed Abdelaziz to be completely subservient to the Algerian military intelligence services (DRS.)
The magnitude of the action and the hoisting of so many Moroccan flags show that the Polisario opponents are numerous and that they are determined to fulfil their goals. In any case, the operation was so effective and plunged DRS senior officers in total panic, according to sources from inside the Tindouf camps.
A DRS Colonel who masterminds the control of the Sahrawi camps gave instructions to Mohamed Abdelaziz to remove and destroy the Moroccan flags immediately, according to the same sources.
This move was followed by drastic measures that evidence the panic of the Polisario and its Algerian backers. Their disarray is all the more great that the uprising unveiled loopholes in the Polisario ranks and took place just few days before a meeting of the UN Security Council on the Western Sahara issue.
Thus, the camps were gated-in and subjected to thorough searches and check-ups in an attempt to catch the supporters of the Moroccan autonomy plan. The Polisario militia arrested many young people and seized a large number of leaflets.
The DRS Colonel did not stop there. According to the same sources, he ordered Mohamed Abdelaziz to force all Sahrawi families to hoist on their hovels or Khaimas the flag of the Polisario-proclaimed Sahrawi republic to prove that the Polisario has the situation under control.