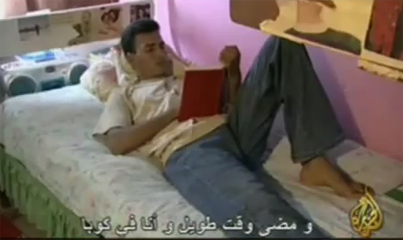 Spanish daily ABC disclosed recently that nearly 10,000 Sahraouis from the Tindouf camps have been trained in Cuba since the 70’s.
The story is all the more interesting as it was published by a component of the Spanish media, which is well-known for its biased stand when it comes to the Western Sahara issue.
ABC daily thus focused on another aspect of the Western Sahara conflict and shed light on the Cold war context where the Polisario was set up by the notorious Kadhafi  and the  generals of the Algerian intelligence services. And now you know the rest of the story.
First the forced displacement of thousands of Sahraouis. Embarked hastily aboard military and all-wheel drive vehicles, they were sent to the camps of Tindouf in Algeria. Then, Fidel Castro showed up and proposed to host hundreds of Sahrawi children from Tindouf every year.
Young Sahraouis were thus snatched away from their families and sent to Cuba to undergo political indoctrination and military training and thus be prepared to fight for the independence of the Western Sahara.

Several Sahraouis who succeeded to escape from the Tindouf camps made moving testimonies on the ordeal the young people sent to Cuba had gone through and said that the tough military trainings, brainwashing and psychological coercion did not spare anyone, not even very young children, sometimes not older than 12 or even 8, according to a Polisario dissident.
The revelations made few years ago by a young Sahraoui girl who spent a part of her childhood and adolescence in Cuba, before reunion with her family in Tindouf, had been particularly disturbing. Her experience had sounded the alarm as to the thousands of Sahrawi girls who had been snatched away from their families and deported to Cuba.