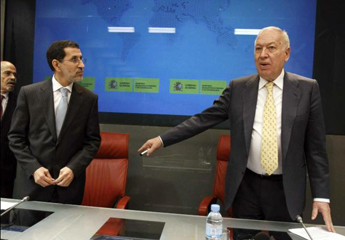 The Spanish government led by Marioano Rajoy, Chief of the Popular Party (the right wing in the power) adopts the same conduct as his predecessor from the left ring , concerning the Western Sahara issue. The Spanish Foreign Affairs and Cooperation Minister, José Manuel Garcia Margallo, has reaffirmed last Friday in Madrid, that his country is still hoping for the adoption of a fair, sustainable political solution accepted by the concerned parties, for the final settlement of the Sahara conflict. During a press conference held jointly with his Moroccan counterpart, Saâd-Eddine El Othmani, at the end of his first official visit to Spain, Garcia Margallo has specified that “the Spanish government is not at all concerned by the modalities of self-determination practice”. The Spanish position about this subject, he said, is “clear”. The parties concerned by this conflict, he recommended, should reach a political solution within the efforts made by the UN to put an end to this old conflict lasting for 36 years.

For the chief of the Spanish diplomacy, « any solution accepted by the parties may rely on the support of Spain ». Furthermore, Madrid, has assured Garcia Margalio, spports “all the efforts made by the special envoy of the UN Secretary General for the Sahara, Christopher Ross, so as to progress in negotiations between the parties” in conflict. The Sahara and the agriculture and fishing agreements between Morocco and the European Union have been largely discussed by El Othmani with the Senior Spanish leaders during his first official visit to Madrid.