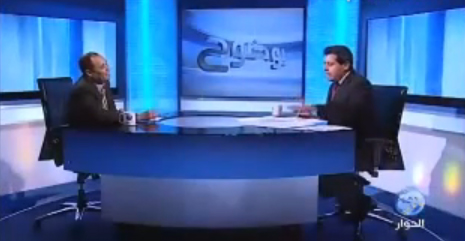 The Polisario Front has perhaps never been ran down as it was during the program « bi woudouh » (clearly) aired by Hiwar Channel transmitted from London. The program guest, Al Amine Aba Ali, the Front’s representative in London, discussing Morocco’s sovereignty on the Western Sahara, has been about to have hysterics. The confusion has reached its height when he was asked to explain the role of Algeria in the creation of the Polisario and the support it provides to this Front, or about the diplomatic and financial machine which makes the separatist movement work.
The Front representative has been particularly embarrassed by the questions on financing sources which allow the movement to provide for its executives and diplomatic activities at the international level, as well as about the sophisticated armament which it possesses. Driven to the wall, Al Amine Aba Ali has finally dared a dodging by admitting that the unconditional support of Algeria comes within the traditional support to the fair causes all over the world. Without forgetting to thank Algiers’ leaders for their intense generosity in providing shelter, financing and arms to the Polisario.

The despondency of the Polisario representative has reached its height when he had to make a statement about the place of birth of many members of the Polisario leadership, settled today in Algeria. Starting by that of the Polisario chief, Mohamed Abdelaziz. The fear was clear on his face if he had to answer that the latter was born in Marrakech. Finally, he had simply answered that he did not know where the Polisario leader was born, as it is the case for the other Polisario executives.
The end of the interview was but a long cross path for Al Amine Aba Ali. Whether it was about the case of the Polisario dissident, Mustapha Salma imprisoned and tortured for having supported t Moroccan autonomy plan for the Sahara, or the repression of the internal opposition or the movement’s control of the Sahrawi populations in Tindouf, Al Amine Aba Ali has preferred to buck the question.