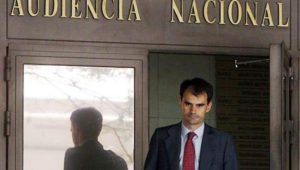 Brahim Ghali, who was appointed, Saturday, new head of the Polisario Front, is actually a torturer of the Sahrawi separatist movement and is subject of an international arrest warrant, issued by the Spanish judiciary which prosecutes him for crimes against humanity.

The Spanish justice is prosecuting Ghali, one of the torturers of the Polisario and of the Algerian army, for “genocide, torture, forced disappearances, illegal detention and serious violations of human rights” committed in the Tindouf camps.

Brahim Ghali, former Polisario representative in Madrid, had been summoned to appear before court in 2008 to answer for crimes committed when he was heading the Polisario armed militia between 1976 and 1989. But he never complied with the summons issued by Spanish Judge Pablo Ruz of the National Court, Spain’s highest criminal court.

At the hearing, several Sahrawis who were victim of torture, inhuman treatment and serious human rights violations committed in the jails of Tindouf, made moving testimonies about their ordeal, while Brahim Ghali succeeded to sneak out of Madrid. Yet, he is still wanted by the Spanish court.

The witnesses, including, among others, El Kabch Mohamed Nafee, El Kharchi Lahbib and Chouiaar Mohamed Mouloud, appeared before the Spanish court in March 2014 and made poignant testimonies on the suffering they endured in the infamous “Errachid” prison.

These survivors, whose bodies still bear the stigma of torture, confessed to Judge Pablo Ruz that they had also been witness to the killing of several inmates, tortured to death by the Polisario torturers under the watchful gaze of Officers of the Algerian army.

The name of Brahim Ghali was recurrent in the testimonies before the Spanish court. And it is this very Brahim Ghali, a former so-called defense minister, that the Algerian rulers have propelled at the head of the pseudo Sahrawi Republic “SADR” in replacement of Mohamed Abdelaziz, who died end of May.

This Brahim Ghali is also the subject of a complaint for rape and sexual abuse lodged at the National Court in 2013 by a young Sahrawi woman, Mrs. Khadijatou Mahmoud Mohamed Zubair.

This Brahim Ghali, on the other hand, tops the list of wanted terrorists in Spain for the assassination of thirty fishermen from the Canary Islands. The fishermen were killed at Ghali’s orders by the Polisario armed militia he was commanding during the 70s and 80s.