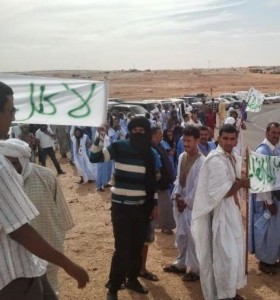 The Tindouf camps have been shaken on the first day of Ramadan by an unprecedented protest movement ever organized by the camps residents. The starving populations that are isolated from the rest of the world have staged numerous sit-ins and demonstrations to denounce the arbitrary seizure of their vehicles by the Polisario armed militia at the order of Algerian army officers.

The starving populations that are lacking food and water have also denounced the blockade that has been imposed on them for forty years by the authorities of Algeria, the host country, which also deprives them of their most basic rights, including the right to freedom of expression and movement.

The sit-ins and protest demonstrations were staged at the initiative of the Youth Movement for Change (MJPC) in various camps of Tindouf, where hundreds of Sahrawis simultaneously took to the street.

The protesters demanded the release of their comrades arrested by agents of the Algerian military intelligence services (DRS) and the termination of the seizure of their vehicles that they badly need to supply foodstuffs to the populations during this month of Ramadan. The goods are generally brought from nearby Algerian cities.

The situation in the camps has become explosive as a result of a decline in international humanitarian aid. Actually several donors have lowered or completely stopped their assistance to the Tindouf camps after the European Anti-Fraud Office (OLAF) revealed in a well-documented report that Polisario leaders and Algerian officials have been systematically diverting the aid and that the fraud has been going on for years.

According to the OLAF report published in early 2015, the donated foodstuffs and medicines that reach the Tindouf camps are sold to the populations by the Polisario leaders and militia.

As soon as the protest movements started, the Polisario militias were instructed to quickly disperse the rallies but were told not to make an excessive use of force as they used to.

The order not to use force was not given out of respect for human rights but just because at the time, the UN Secretary General’s Chief of Staff, Susana Malacorra, was on a visit to the Tindouf camps.