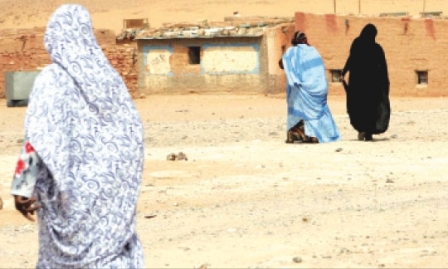 Thousands of Sahrawi refugees are herded in the Tindouf camps in the Algerian desert. But have they really got the choice to decide freely for their fate?
It is a question that is often raised by observers and foreign journalists who visited the camps and who are following closely the living conditions of these refugees, some of whom were born and grew up in these completely isolated camps.
One of these refugees and members of his family lately decided to settle down in Smara, instead of returning to Tindouf, after they visited the city part of the 12th family exchange visits operation sponsored by the UN High Commissioner for Refugees (HCR). These are Mohamed Ould Abid Ould Mohamed Ould Mbarek, Khira bint Brahim Ould Mbarek, 72 year old, and his brother Fadli, 34.

Native of the R’guibate Lebihat tribe, Mohamed Ould Abid, 44, spoke in a moving testimony before newsmen about the sufferings he endured during the 36 years he spent in the Tindouf camps. Explaining why he decided to stay in Morocco and refused to go back to Tindouf, he said “life in the separatists controlled camps was becoming more and more unbearable”.
The Morocco native refugees are all hoping to free themselves from the Polisario’s grip and to return to their native country, Ould Abid said in a bitter tone. He said he has been compelled to leave behind his three sons, who are attending school in Algeria, even though he is aware of the dangers they may face. He said he could not miss this unhoped-for opportunity to flee the camps, an opportunity he had been for so long praying for.
The majority of Sahrawi refugees in Tindouf are only waiting for the end of the blockade imposed on them to escape “the hell of the camps, ill-treatments and hard weather conditions”.
On his new life in the city of Smara, Ould Abid said it has nothing to do with his dire living conditions in the camps of Tindouf, calling his fellow countrymen to follow his example and to leave the haunted camps to recover their freedom.